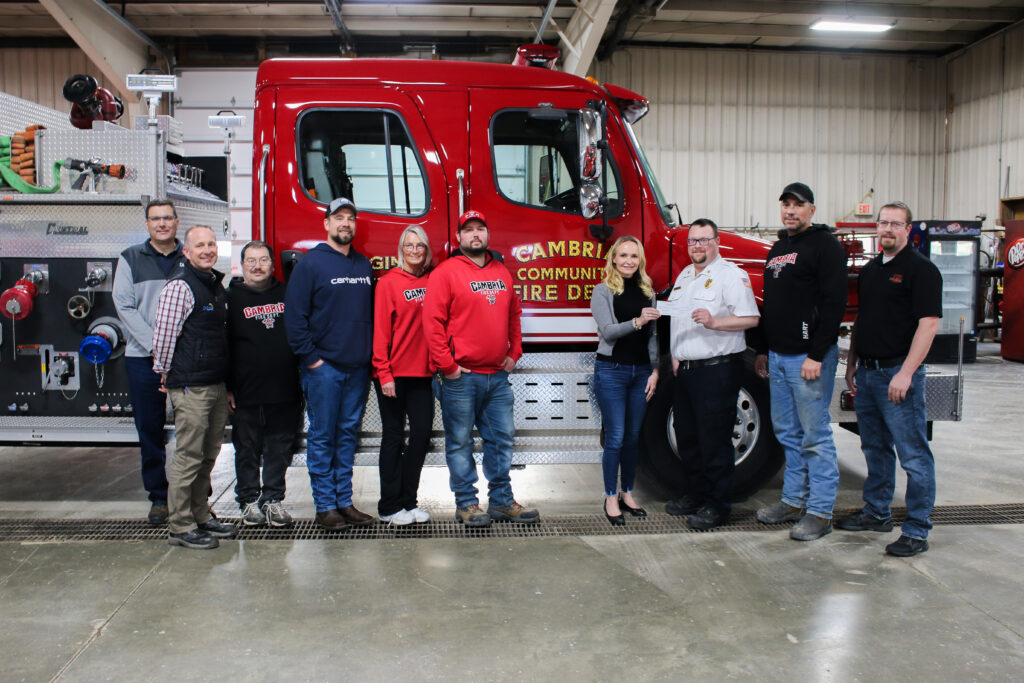 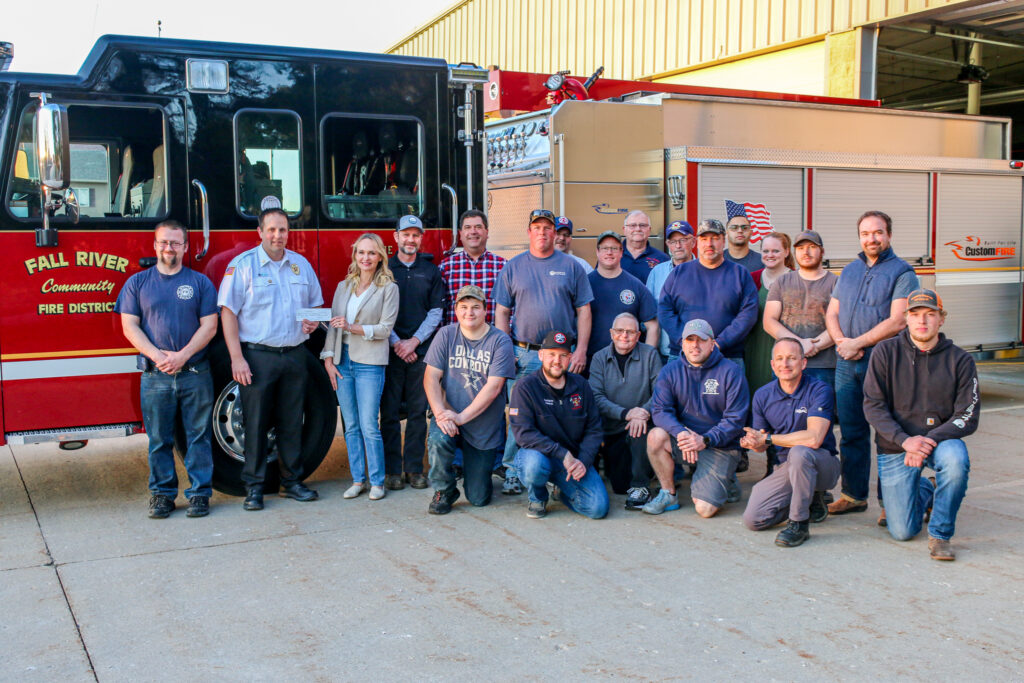 Sun Prairie, WI – Didion is marking its 50th anniversary by contributing $100,000 through the Didion Milling Foundation to local fire departments, law enforcement agencies and programs that serve local youth and families in need.

The donations include a combined $77,500 to the Cambria, Pardeeville, Randolph, Friesland, Columbus, and Fall River fire departments, and Columbia and Jefferson County Sheriff’s departments. Didion hopes this money will help agency initiatives, such as officer safety equipment, training, and mentoring initiatives.

“We have the highest respect for the folks on the front lines,” said Riley Didion, Didion President. “They work 24/7/365 to keep our employees, friends and neighbors safe. They faced new challenges during the pandemic and for that we are honored to play a small role in supporting their critical work in our communities.”

“We currently have a six-wheeler ranger that limits the areas we can reach in a crisis,” said Cambria Fire Chief Cody Doucette. “This donation will go towards purchasing a new Polaris ranger that will benefit the community around us because it will allow us to access hard-to-reach areas in the event of an emergency.”

“Didion’s donation means a lot to all of us,” said Chad Jones, Fall River Fire Chief. “It shows the kind of commitment Didion has to our department and surrounding departments to protect our communities when they need us the most. We don’t usually see this level of financial support from one company, and it comes on the heels of two years of not being able to hold fundraisers. We couldn’t be more grateful.”

50 Years in the Making
These gifts continue a five-decade history of support for community efforts large and small.  Since its inception, Didion has bolstered community efforts through corporate and staff-supported charitable giving. These include Kiwanis toy drives, American Red Cross blood donation drives, school athletics and education, and local food drives, among dozens of other important initiatives. Didion started the Old Mill Foundation in 2006 to enhance its support of various community partners.

Keeping close to its roots, Didion is a strong supporter of youth organizations that introduce future agricultural professionals to the world of farming technology, science, and business. Didion has long been involved in local agriculture through local and national ag educational opportunities, including at some of the country’s top higher education ag programs. To reinforce those efforts, the Didion Foundation is contributing a combined $15,000 to Randolph Cambria Friesland (RCF) and Pardeeville Future Farmers of America (FFA).

“Some of our own team members got their start in agriculture through FFA,” said Coral Didion, Didion General Counsel, VP Marketing & Communications. “It really brings our 50-year history full-circle to have the privilege of supporting the same agricultural community that has helped us serve so many for half a century.”

The Didion enterprise began in 1972 as a grain storage business and soon after took on government corn contracts to provide famine relief around the world. The original dry corn mill was built in the early 90s ,and the ethanol plant opened in 2008. After a tragic accident at the corn milling facility in 2017, the company rebuilt a state-of-the-art mill to continue to provide jobs in the local community and products around the globe. The new mill opened in 2019, and in 2020, Didion reconfigured the ethanol facility to address hand sanitizer shortages in the early stages of the COVID-19 pandemic.

Brothers John and Dow Didion, who started the operation 50 years ago, are still actively involved in the business. John’s son, Riley, and Dow’s daughter, Coral, are now leading a second generation of the family business.

Rounding out the $100,000 in financial support is the Didion Foundation’s $15,000 gift to Habitat for Humanity of Dane County. To commemorate National Volunteer Week, dozens of Didion team members will participate in a Habitat “frame-up” event in late April, building interior and exterior framing alongside the future homeowners, Ismet and Besjana, and their children. Didion is one of only ten companies donating to Habitat for Humanity of Dane County at this level in 2022.

“Didion should be proud of its part in truly transforming the lives of the homeowners they are building alongside,” said Aaron Mullins, Habitat for Humanity of Dane County Advancement Director. “Partnerships with companies like Didion that care about helping their communities prosper are the only way we can provide affordable homeownership to families.”

The following is the list of agencies and departments receiving financial support from the Didion Foundation throughout April:

The Didion Foundation Story
Didion has long been a community partner in local philanthropic efforts. Didion started the Didion Milling Foundation in 2019 to further expand support for important community initiatives.

The Foundation has raised funds through its annual golf outing, which is attended and supported by the company’s partners, customers, and industry peers.

“We couldn’t offer this level of financial support without the amazing partners who join us at our golf outing each year,” said Riley Didion, president of Didion. “We pride ourselves in partnering with companies who share our same vision of making the world a better place.”

Riley adds, “The greatest impact we can have as human beings is leaving the world a better place and how we treat each other. Doing good and improving someone else’s life is at the core of what we do here at Didion – not just from a business point of view but also with each other as team members.”

Didion uses a proprietary milling process to capture only the highest quality corn kernels for food processing and designs customized products that can meet specific customer needs from top grocery and food service brands. The rest of the corn kernel is used to produce alcohol-based products, such as hand sanitizer.

In addition to corn flours, grits, meals, pregelatinized ingredients, and whole grains, Didion makes over 350 million corn- and soy-based meals each year for the USAID program through the USDA. These meals help to fight global hunger in four dozen developing nations.