Get to Know: Michael Greco 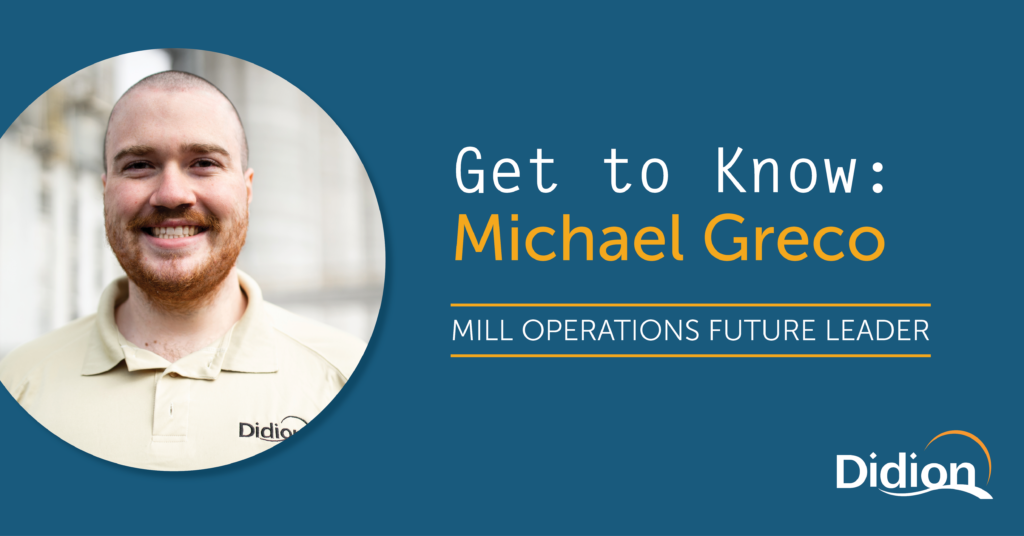 On any given day, you’ll find Michael Greco working with the supply chain team by assisting with preparing product deliveries at Didion as a Mill Operations Future Leader.

Michael started at Didion in June 2020 after graduating from Kansas State University, affectionately called K-State. While considering which path to take in college, he learned about the K-State Milling Science program when he attended the ‘Majors, Minors and Activities Fair,’ hosted by the Career Center. Three things stood out about joining the milling industry: K-State is the only university in the world that offers a four-year bachelor’s degree in milling science, which virtually guarantees 100% job placement for its students, and the hands-on nature of the program. After further conversations with the department staff and other industry professionals, Michael declared a Milling Science major. He gained a range of experience through internships at a grain elevator in Kansas and at a milling company in Minnesota and Illinois throughout his academic career.

So, how did Michael and Didion cross paths?

The Milling Science department frequently held information nights for students to network with various milling companies as they looked for internships and full-time positions. It was here that Michael first heard about Didion Milling.

Didion’s partnership with K-State, specifically the Milling Science program, started 4 years ago. Didion values the relationship for many reasons, including the high-quality education K-State provides to its milling students, preparing them for a bright future in the industry. Through this partnership, Didion has had the opportunity to host information nights and onsite interviews for the Milling Science students, which assists with recruiting high-quality interns for various departments across the company.

Didion was on Michael’s list of his top three companies to work for during the interviewing process, mainly due to the authenticity of the team members he spoke with and the first-hand experiences he heard from his classmates who have interned with Didion. Michael’s previous internship experience helped him figure out what he did and didn’t want in an employer and his desire for growth opportunities. He was thrilled when he was offered a full-time position with Didion Milling.

A few months later, Michael attended the K-State information night and assisted in onsite interviews as a full-time team member. He loved being involved in the interview process, because could relate to the students because he was where they were not long ago and knew what was important to them when considering a future in the milling industry.

His favorite part about Didion? The close-knit relationships he has built with team members across the company who embody the Didion culture, live the team mentality, and value safety for themselves and their coworkers. Knowing there are personal and professional growth opportunities available to him at Didion, Michael looks forward to continuing to challenge himself.